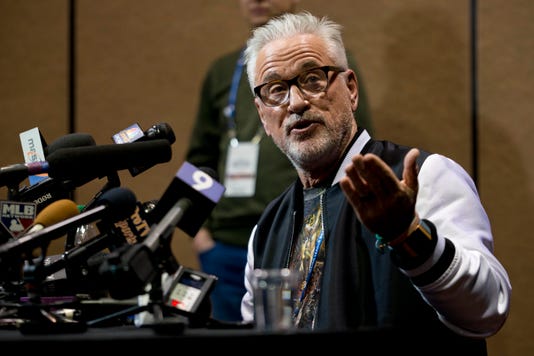 Joe Maddon is the only manager in 108 years to lead the Cubs to a World Series championship.(Photo: Daniel Clark, USA TODAY Sports)

LAS VEGAS — Joe Maddon strolls through the lobby of the Mandalay Bay Resort and Casino and can barely take more than a few steps before being stopped for autographs, posing for pictures and strangers wanting casual conversation.

He’s either a lame duck manager for the Chicago Cubs or a potential free agent, depending on the moniker, but he’s still a rock star at these winter meetings, looking as cool as Frank Sinatra, and showing the stress of holding a full house at the poker table.

He’s 64 going on 44, wearing a letterman’s jacket with a portrait of his one of his charity paintings on the back, with a funky colored t-shirt like he’s part of a modern-day rat pack.

The dude even admitted Tuesday that he’s reading a new book:

“And I’m really starting to understand this a little bit better.’’

Who knows, maybe one day the most popular coach or manager in Chicago since the days of Mike Ditka and Phil Jackson will even understand why he has less job security than a beer vendor at Wrigley Field?

He’s the only manager in 108 years to lead the Cubs to a World Series championship, the only one in franchise history to lead them to four consecutive postseason berths, but it hasn’t mattered.

He wanted a contract extension before the winter, but it was denied by Cubs president Theo Epstein, leaving Maddon entering the final year of his five-year, $28 million contract.

“I am not offended,’’ Maddon said. “I don’t feel badly about it. I’ve been there before. It’s all good. I am very happy with my stature and my status.

“If you have a lot of self-confidence, things like that do not bother you, and I do. …I think you’ll see that trend continue. The whole objective now, and we want to put the emphasis on us and winning. And I definitely don’t want the emphasis on me.’’

No matter how little Maddon may want to talk about his job status, it will be a huge topic all season in Chicago. If the Cubs go on a losing streak, the buzzards will be circling talk shows. If the Cubs keep winning, Epstein and the front office will be pressed on an extension.

It promises to be a drama-filled summer when perhaps nothing less than a World Series title may save Maddon’s job.

The Cubs told Maddon his priority shouldn’t be to entertain the media, talking about his latest endeavors, or opening restaurants, but to spend more time with his players. It’s time for a hands-on approach.

“It should not be a surprise when you have high expectations like we do, and you don’t meet them,’’ Maddon said, “you’ve got to do something about it.

“I expect more out of myself, also. I love challenges. Probably to this point, I’ve probably had more conversations via text or actual phone calls with guys than I’ve had in the past, despite moving around a whole lot.’’

It’ll simply be Maddon going back to his roots, being the one that moves around on the field, instructing, engaging, and making sure they win the NL Central again instead of being relegated to being a wild-card victim.

“Part of the plan is to get out a little more often on the field, which I love,’’ Maddon said. “It’s not going to be a dramatic difference, but I do like to coach, and there’s a distinct difference between managing and coaching.

“Having this opportunity to get back on the field more in a coaching role more often, I’m looking forward to it. My teeth were cut in development. I am a developmental guy.’’

Really, Maddon kept reiterating, everything is cool. Sure, he’d love to have a long-term contract extension. He wants to keep on managing past 2019. He wants to stay in Chicago.

And, yes, he wants to keep on being himself, insisting he has absolutely no personality issues or philosophical differences with Epstein or anyone in the front office.

“The concept that Theo and I have any kind of a disengagement or a lack of philosophical sameness is untrue,’’ Maddon said. “We have great conversations. And we’re almost a 100% on the same page all the time.

“I’m not going to defend myself, because I think that’s a boring method when you have to defend yourself against something like that. I just know that we are on the same page, and philosophically really aligned well.’’

This is a team, after all, that still won 95 games last year, despite scoring one of no runs in 40 games, Yu Darvish winning just one game, and closer Brandon Morrow missing the second half of the season.

They aren’t pursuing Bryce Harper. They couldn’t even afford to squeeze center fielder Billy Hamilton into their budget. There will be no savior coming to their rescue with their budget limits.

“I feel very confident moving forward that I’m going to be a big part of the Cub organization,’’ Maddon said. “Let’s just win the World Series and see how it plays out.’’

A season on the brink awaits.