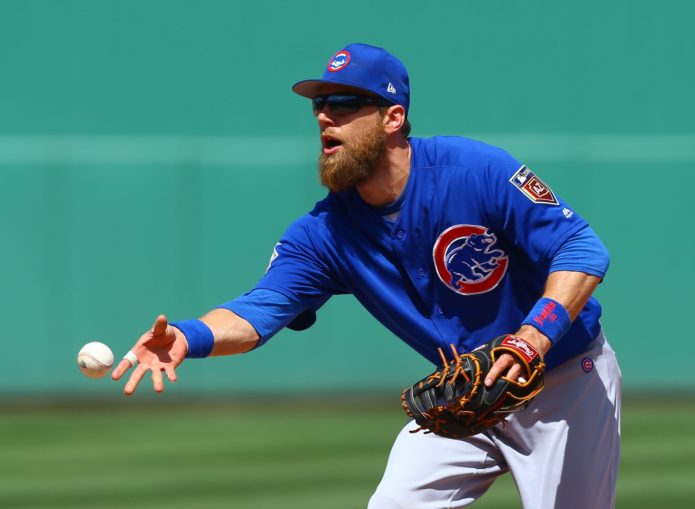 The Chicago Cubs have reportedly mulled the idea of trading veteran utility man, Ben Zobrist per Sahadev Sharma of The Athletic (subscription required).

Zobrist is expected to make a large impact for the Cubs early on next season due to the absence of shortstop, Addison Russell, who is serving the remainder of a suspension. Despite his value, the Cubs need bullpen help and payroll flexibility and they could use Zobrist as an attractive trade chip.

While no deal is close at the moment says Sharma, the soon to be 38-year-old is set to make $12.5 million this upcoming season before becoming a free agent next year, which could entice Chicago to deal him for additional long-term assets.

According to Ken Rosenthal of The Athletic, the Los Angeles Dodgers are reportedly targeting free agent centerfielder, AJ Pollock. While Pollock’s injury history remains a concern, the Dodgers certainly have enough depth should the 31-year-old land on the disabled list at any point this season.

The Dodgers, who are a very left-handed heavy lineup are looking to add Pollock in order to create more right-handed balance on their roster and spell Cody Bellinger back to his natural position at first base, says Rosenthal.

The New York Yankees agreed to a deal on Sunday to send starting pitcher, Sonny Gray to the Cincinnati Reds in exchange for second base prospect, Shed Long and a supplemental draft pick per Jon Heyman of Fancred. While both teams ultimately agreed upon this trade, nothing will be finalized until Gray and the Reds reach an extension, which still leaves room for the initial package to be reconfigured, although Cincinnati is fairly confident they will complete one, writes Heyman.

According to Rosenthal, the 72 hour window for negotiating this deal expires later today. It is still unknown whether the teams have an alternate deal lined up in the wake that an extension isn’t reached, or if the Yankees would send Gray to another club if there’s no agreement by this deadline, writes Rosenthal.

Despite Gray’s struggles with the Yankees last season, he will be reunited with former college pitching coach, Derek Johnson, who was just hired to fill this role with the Reds. Gray endured tremendous success under Johnson at Vanderbilt, where he put up a 12-4 record with a 2.43 ERA in his junior season and helped lead the team to their first ever College World Series appearance in 2010.

The former two-time all-star’s versatility is very valuable due in part to his ability to play multiple infield positions, along with both corner outfield spots. Despite this impressive factor, Harrison is coming off an injury riddled season, where he posted an underwhelming 0.3 WAR and .250/.293/.363 stat line in 97 games, which were his lowest totals in each category since 2013.

Reds and Others Show Interest in Kelley

It was reported by Heyman yesterday that up to ten teams, including the Cincinnati Reds are interested in one of the top remaining free agent relief pitchers in right hander, Shawn Kelley.

The soon to be 35-year-old reliever, is coming off a more than solid season, where he spent time with the Washington Nationals and Oakland Athletics posting a 1.1 WAR, 2-0 record, and 2.94 ERA, while striking out 50 batters in 49 innings.

Who Is In Line For Consideration If Chicago Cubs Seek Regime Change? – Forbes

A Period Of Uncertainty Looms For The Chicago Cubs – Forbes

Wake Up, Hype Up, Grab Your Chains, and Get Ready for Chicago Cubs Playoff Baseball! – bleachernation.com