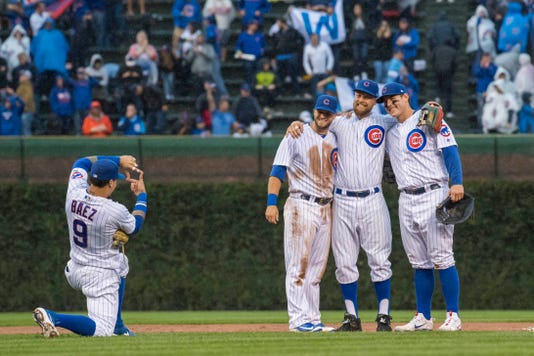 CHICAGO — You know things are getting weird in Chicago when the Cubs drank shots of whiskey before their three-game series against the St. Louis Cardinals, and the Cardinals volunteered to put their historic rivalry to rest, even suggesting they celebrate together Sunday at Wrigley Field.

The Cubs are gathering their party favors as they lowered their magic number to 2 on Friday with an 8-4 victory over the Cardinals. They expanded their NL Central lead to 1½ games before the Milwaukee Brewers took the field Friday night against the Detroit Tigers, and potentially can clinch their third consecutive division title Saturday.

Yet, for a team that has taken team parties to another level, the Cubs’ celebration has been, well, a little awkward.

It dawned on the Cubs on Thursday that they never got around to celebrating their playoff berth when they clinched at least a wild-card spot Wednesday night with their victory over the Pittsburgh Pirates. They planned to wait and celebrate in style after they clinch the NL Central title, but what happens if they don’t win it, and the Brewers are the division champs?

They would be in the playoffs, for the fourth consecutive year, but wouldn’t have celebrated their accomplishment.

So Cubs manager Joe Maddon rounded up his players Thursday afternoon, and told them no matter what transpired during their game that evening, they were going to at least have a mini-celebration.

The Cubs won, increasing their lead to one full game over the idle Brewers, passed around glasses filled with whiskey before reporters entered the room, and toasted their season.

“We had them all in the big circle [of the clubhouse],’’ Maddon said, “and I wanted to praise them and congratulate them for the work they’ve done.’’

So why in the world didn’t they celebrate Wednesday when they officially clinched their playoff berth?

“A lot of the guys were gone,’’ Maddon said, “when I figured things out.’’

The truth is that Maddon didn’t know the Cubs had even clinched until reporters told him during his postgame news conference, and by that time, it was too late to plan anything.

Is it too late to have a full-fledged party, even if the Brewers wind up winning the division title?

That is Angela, the character in “The Office,’’ who planned the parties for the Dunder Mifflin company.

Well, if you think that’s goofy, how about turning their potential division-clinching celebration into the most bizarre in baseball history? These two rivals, filled with hatred over the last century, actually hugging and spraying champagne on one another Sunday?

“I would love that,’’ Cardinals manager Mike Schildt said. “Let’s do it.’’

The concept isn’t as far-fetched as it seems.

If that happens, you’re going to see Cardinals rushing onto the field, celebrating their playoff berth. And the Cubs mobbing one another, celebrating their division title. Wrigley Field will turn into a lovefest, with fans wearing Cardinals’ red and Cubs’ blue hugging and dancing together down the aisles.

Well, while the dual celebration makes great theater, the Cubs would just as soon win out, not only winning the division, but eliminating the Cardinals.

“I haven’t even thought of that,’’ Maddon says, “but it’s a very alert time of the year. You have this heightened state of alert.’’

Cubs starter Kyle Hendricks took the suspense out of this game early with his latest masterpiece, limiting the Cardinals to just seven hits and two earned runs in eight innings, and lowering his ERA to 1.66 in his last eight starts. Hendricks, who has pitched a career-high 199 innings this season, now has gone 18 consecutive starts without walking more than two batters in a game.

“We don’t take it for granted what he’s doing,’’ Cubs outfielder Jason Heyward says, “but you almost expect this.’’

It’s almost expected now that they’ll be in the postseason each year. There was little energy from the crowd of 39,442, perhaps awaiting the division title to really cut loose.

“Our destiny is in our hands,’’ said Kris Bryant, who hit only his second homer since July 20 after battling shoulder problems. “This team is so fun to be a part of, and this is the time of year where you want to have something to play for.’’

It’s the kind of drama the Cubs have thrived on these last four years, and now, they want more.

“We’ve made the playoffs, and nobody in the clubhouse is satisfied with that,’’ Cubs ace Jon Lester says. “I don’t think that’s an arrogance. We all expect to win our division.

“Hopefully, that comes to fruition this weekend, and we’ll celebrate then.’’

Maybe, they’ll even have company.