Chicago Cubs Drop Magic Number to 2 in Win Over Cardinals

The Chicago Cubs took another step toward a division title on Friday as they beat the St. Louis Cardinals in a rain-soaked game at Wrigley Field.

The win drops the Cubs’ magic number to clinch the division title to just two, and extends their division lead to a game and a half over the Milwaukee Brewers.

Kyle Hendricks was masterful once again, giving up two runs in eight innings of work. He ended the game with 199 innings pitched this season, a new career high.

Kris Bryant socked his 13th home run of the season, and Anthony Rizzo drove in a pair of runs for the Cubs as they won their third game in a row.

The Cubs got their scoring off to an early start against Adam Wainwright, as Rizzo singled to center field to score Daniel Murphy. Jason Heyward then followed that up with an RBI fielder’s choice, driving in Ben Zobrist to make it a 2-0 game. 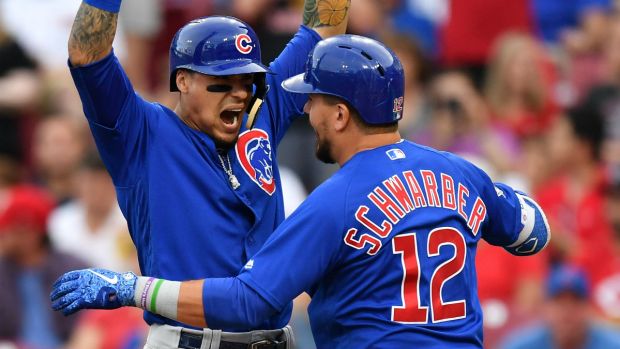 The score remained the same until the fourth inning, when Bryant launched a home run to deep center field to make it a 3-0 game. Rizzo hit a sacrifice fly to center to score Murphy in the bottom of the fifth, giving the Cubs a 4-0 advantage.

The Cardinals struck twice in the sixth inning, but the Cubs bounced right back as Murphy hit a sacrifice fly in the seventh and David Bote drew a bases-loaded walk in the eighth to add some critical insurance runs to the team’s lead.

The Cubs and Cardinals will resume their series at 12:05 p.m. Saturday afternoon at the Friendly Confines.

Stay tuned to the NBC 5 app all postseason long as the Cubs try to win another championship!

Available for IOS and Android